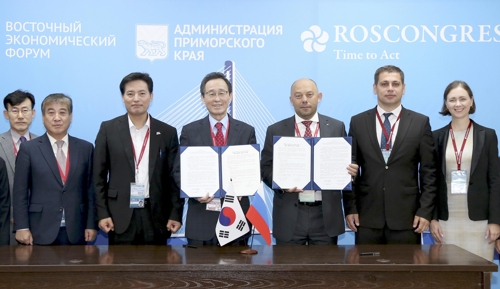 (JEONJU=Yonhap News) On September 5, Jeonbuk-do announced that its delegation led by the governor signed an MOU with Primorsky krai, Russia to cooperate on stimulating exchanges between two regions.

The two sides agreed to make joint efforts to establish a practical system and pursue cooperation and development.

The governor invited business people, buyers, and experts of Primorsky krai to the International Fermented Food Expo (October 31-November 4) and proposed to attract tourists from each other, and exchange in Taekwondo.

The governor said at the MOU signing ceremony, "Jeonbuk is very traditional region, but is leading some of the government's major projects such as Saemanguem, carbon, and renewable energy projects," adding that "exchange between the two regions will generate synergy effects."

The delegation also made a visit to a Korean school in Usurisk, a center of the anti-Japanese movement, and gave a Korean signboard hand-written by the governor.