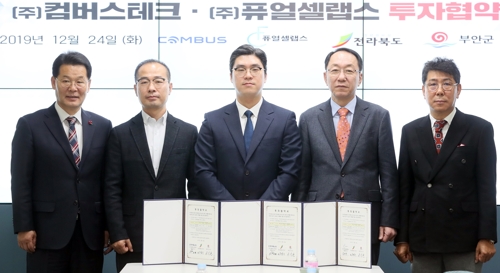 The signing of an investment contract for a construction project was made on Dec. 24 between Combustech & FuelcellLabs, hydrogen fuel cell makers. The two agreed upon a new production line in the rural city of Buan, North Joella Province, for business growth.

Under the contract, Combustech unveiled a plan to establish a new factory set on 33,000 square meters of land to produce hydrogen fuel cells and drones.

FuelcellLabs, which spends as much as KRW 10 billion on the new manufacturing plant, will have an R&D center and a hydrogen fuel cell production facility which stretches towards 12,000 square meters inside the general industrial complex. Once the project is successfully over, the local community appears to have 70 new jobs.