(DAEJEON=Newsis News) The Korea Advanced Institute of Science and Technology announced Nov. 29 that it will be holding the final match of the world's first artificial intelligence soccer tournament AI World Cup 2017 on December 1 at its main campus in Daejeon.

The AI World Cup is a soccer tournament in which the players are AI robots that move without human manipulation.

During the event, real-time commentaries and written news updates will also be made by AI teleology.

The final four teams that passed the preliminary rounds on November 30 will compete for the final match on December 1.

Dean Kim Jong-hwan of KAIST's College of Engineering who is also serving as head of the event's organizing committee noted, "by holding the world's first soccer tournament for artificial intelligence robots, KAIST will gain a competitive edge in its R&D efforts in the field," adding, "next year, the school plans to hold the event on an international scale." 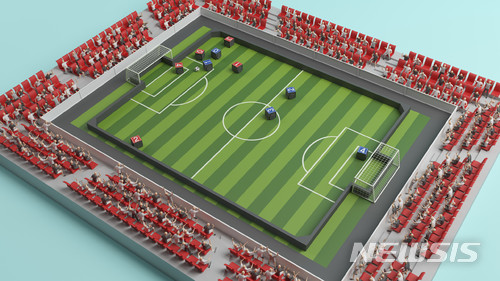