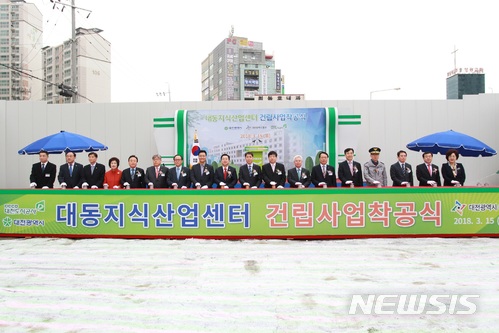 The site that used to belong to Daedong Market in Dong-gu, Daejeon, will be transformed into the Knowledge Industry Center, providing working spaces for cutting-edge enterprises, by 2020.

On the afternoon of March 15, the Daejeon Metropolitan Government held the groundbreaking ceremony for the start of the construction of the Knowledge Industry Center at 143-23, Gyejok-ro, in Daedong, attended by Lee Jae-gwan, the acting mayor; Lee Sang-min, Lee Jang-woo, and Cho Seung-rae, national assemblymen; Hong Jin-dong, the head of the Daejeon–Chungnam Small and Medium Business Administration; Han Hyeon-taek, the head of the Dong-gu District Office; and some 200 locals.

The Daedong Knowledge Industry Center was proposed as an effort to attract hi-tech companies to the deteriorating old town of Daejeon as well as create new jobs for locals. To this end, 42 old buildings that used to form the Daedong Market have been demolished so that a cutting-edge facility, featuring 2 underground floors and 7 floors above the ground as well as offering a total space of 15,386 m2, could be erected on the site of 4,110 m2.

A total of KRW 37.9 billion has been set aside as the project budget. The center, once completed as planned in February 2020, will feature industrial facilities and business amenities as well as residential facilities.