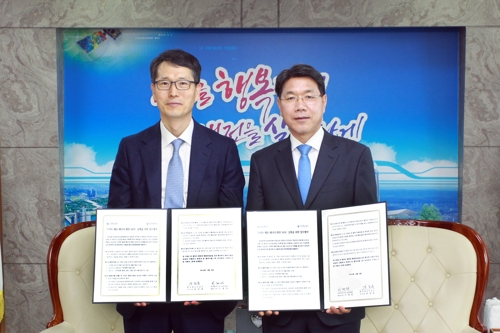 (DAEJEON=Yonhap News) On May 8, the city of Daejeon and the Korea Energy Agency signed the "Business Agreement for a Smart, Zero Energy Daejeon 3050."

Daejeon City Acting Mayor Lee Jae-kwan and Korea Energy Agency Chairman Kang Nam-hoon said they will carry out projects to increase the supply and efficiency of renewable energy through the business agreement.

In addition, they will concentrate their efforts on climate change countermeasures such as greenhouse gas reduction, education and promotion of energy and climate change and creative future-energy projects.

Ahead of the signing, Chairman Kang gave a special lecture on "The Fourth Industrial Revolution and the Changing Energy Paradigm" during which he explained, "the transition to low-carbon, eco-friendly and sustainable energy is reflected in investments in new industries by global corporations and energy policies in developed countries including the United States. Korea is also pursuing policies to foster new energy industries in light of this trend."

Kang went on to say, "As the city of the Fourth Industrial Revolution, Daejeon is expected to play a leading role in energy conversion as it has abundant human resources for new technology research and the accumulation of existing knowledge on technology knowledge and information."