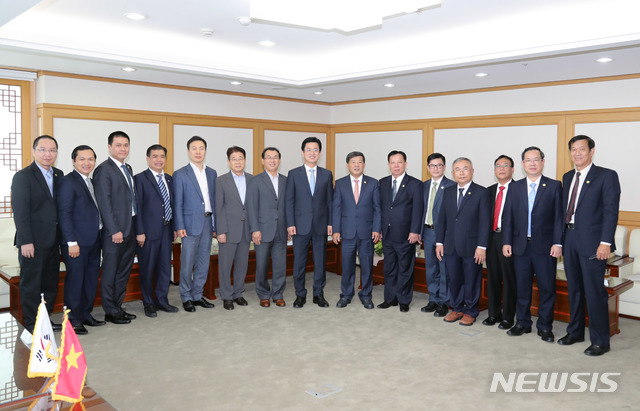 Binh Duong delegation from Vietnam visited the sister city Daejeon on August 16 to discuss on the preparation of the World Technopolis Association (WTA) Events to be held in October.

The delegation led by Tran Thanh Liem, Chairman of Provincial People's Committee had a meeting with Heo Tae-jeong, the new Mayor of Daejeon at the City Hall and discussed on the ways to strengthen friendship between the two cities and preparation of 2018 WTA Events.

The delegation and Daejeon City then had a 2018 WTA Events preparation meeting led by the WTA President at 2 p.m. at the City Hall.

WTA Events have been held every two years since its launch in 1998 in different continents. Celebrating the 20th anniversary of the Association, this year's events will be a large international gathering, held from October 10 to 13 in Binh Duong Province, Vietnam attended by 2,000 people.

Under the main theme of "Smart City", the Hi-Tech Fair will include three exhibit zones of smart infrastructure, smart energy and environment, and smart IT.

At this year's General Assembly, the participants will review the outcomes of the past 20 years and provide a new vision for the future WTA.

The WTA is a multilateral international organization created with the purpose of achieving mutual development of local governments that are driven by science and technology, and contributing to the welfare and prosperity of mankind.

"Daejeon City and Binh Duong Province has been promoting exchanges in various fields during the last 13 years of sisterhood," said Mr. Heo, the President of WTA, adding, "Taking the opportunity of this year's WTA Events, I look forward to expanding our friendship."