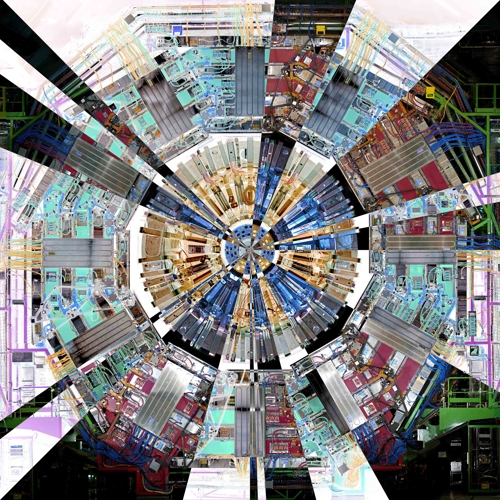 (DAEJEON=Yonhap News) On April 17, the Institute for Basic Science (IBS) announced the opening of exhibition, "CMS＠CERN, The Art of Science" at IBS Science Culture Center in Daejeon on April 24.

The exhibition, running through July 26, presents 30 artworks of Michael Hoch, a scientist and artist of the European Organization for Nuclear Research (CERN) , including photography, collage and installations.

Michael Hoch is an artist working on the theme of Compact Muon Solenoid (CMS), one of Large Hadron Collider (LHC), and founder of art@CMS.

LHC confirmed the existence of Higgs boson, which has often been called the "God particle".

The exhibition is divided into two spaces, and visitors can encounter artworks in unique shapes, including CMS picture in life-size, large enough to take up an entire wall.

IBS President said, "this exhibition is prepared to share researchers' pursuit of the truth with citizens in the month of science," adding that "it will be an opportunity to appreciate the grand scale, geometric structure, and beautiful colors."

The exhibition is co-hosted by CERN and Korea CMS Team, supported by the Korean Physical Society (KPS).

There is no entry fee.