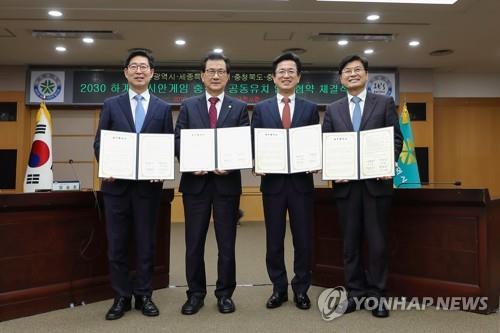 On September 12, North Chungcheong Province, on behalf of four cities and provinces, said it made announcement of public tender for outsourcing of "Study for Basic Plan to attract the 2030 Asian Games in Chungcheong area" on the Korea On-Line E-Procurement System on September 10.

It was a follow-up on the MOU signed in February by Chungbuk governor, Chungnam governor, Daejeon mayor and Sejong mayor.

At that time, they promised to bring together wishes and capabilities of 5.6 million people in Chungcheong, regarding the 2030 Asian Games as an opportunity for Chungcheong area to advance into the center of the world.

The period for study will be seven months since embankment.

The outcome is expected to contain environment for joint attraction of the Asian Games, analysis on potential competing cities, and tasks and strategies.

The expense for study is estimated to be KRW 290 million, which will be shared by four cities and provinces.