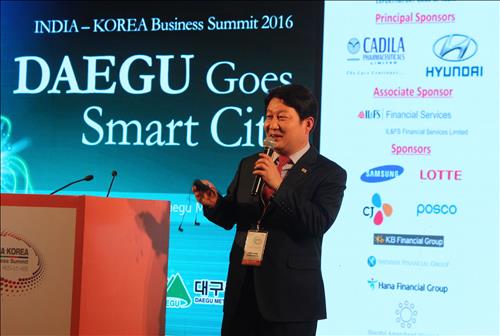 "To Daegu, a smart city enables sustainable growth and helps the citizens to live a happy and pleasant lives. I hope Daegu's experience will be useful for India to build 100 smart cities," said Kwon at the Korea-India Business Summit held on January 15 in New Delhi, India.

"Daegu City is willing to sign a sister city agreement with Indian cities to dispatch its civil servants to the cities and exchange skilled human resources. I hope universities in Daegu including Kyungpook National University and Daegu Gyeongbuk Institute of Science and Technology can cooperate with universities in India," he added.

He also said that the city has established the foundation for internet of things based on its regional ICT human resources and companies and introduced the control system that connects 16,000 CCTVs for transportation and crime prevention.