(DAEGU=Yonhap News) It's so hot you could fry an egg on the heated street in the afternoon in Daegu, but that didn't stop people from gathering in the southern city jokingly dubbed "Daefrica" (a compound for Daegu and Africa) for their summer ritual.

People from all walks of life flocked to a unique festival dedicated to fried chicken and beer, called "chimaek" or "chimac," to fight off the hot and humid weather in the last week of July in Daegu, some 300 kilometers southeast of Seoul.

In its fourth year, "Daegu Chimac Festival" drew about 11 million people during its five-day run to cheer for the fantastic duo in Duryu Park, Pyeongwha Market, famous for its "Chicken Gizzard Road," and the surrounding area. More than 200 food trucks and booths were lined up at the venues to serve a wide selection of chicken and beer on tap. 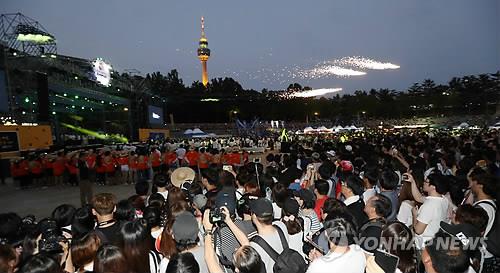 First launched in 2013 by local franchise brands, the event featuring contemporary Korean food culture immediately sparked curiosity among chimaek fans. It has drawn growing attention from business people at home and abroad searching for opportunities to capitalize on the latest trend.

Against the backdrop of idol groups in hot pants dancing to loud music in the evening, youngsters and foreigners ate buckets of fried chicken, licking their fingers and then drinking beer. Families had fun in an outdoor swimming pool and water slide during the summer night.

For elderly Koreans, it was something to see.

"When we were young, only those from a rich family could have an egg fry on top of white rice. I could have chicken during summer when old chickens that no longer lay eggs were slaughtered," recalled Park Jae-sun, a 71-year-old Daegu resident. "A whole chicken was put into a large pot and boiled for hours. As many people had to share the dish, it was mostly chicken broth and rice. If you're lucky, you get some meat out of the soup." 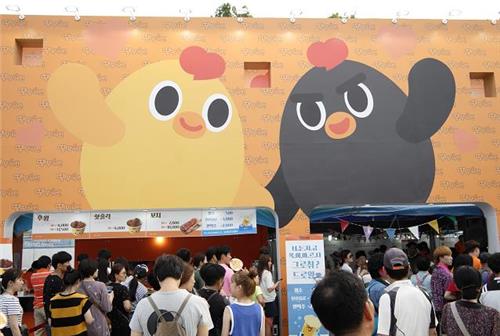 People are lined up in front of a chicken booth set up in Duryu Park in Daegu on July 27, 2016. (Yonhap)

To the eyes of foreigners, a festival held under the theme of "chicken and beer" was something they've never seen before.

"In America, having pizza with beer is more popular. And we don't necessarily eat when drinking," Ashly Berg, a 25-year-old visitor from Wisconsin, said. "I tried chicken and beer together, and discovered the combo goes very well with each other."

It was only after the 1970s when poultry farms mass produced chickens thanks to cheap corn feed, and flour and cooking oil became affordable for majority of people. Since then, many vendors in local markets started to sell deep-fried chicken.

"When I became the breadwinner of my family, I used to buy fried chicken for my kids for birthday, graduation and other family gatherings," Park said, drinking lager beer with his friends. "It was a special food that reminds me of memories of the good old days." 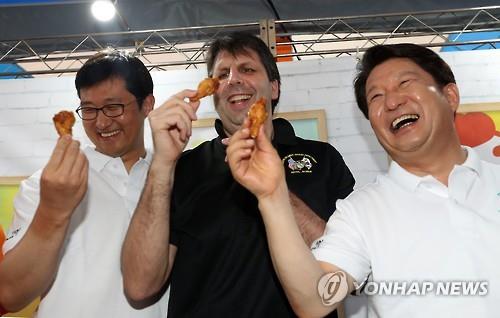 The chicken industry evolved after the U.S. fast food chain, Kentucky Fried Chicken (KFC), debuted in the nation in 1984 and enjoy massive popularity among youngsters.

"KFC brought a new wave of chicken culture to South Korea and taught people about standard fried chicken," Chung Eun-jung, the author of "The story of Korean fried chicken (2014)," wrote in her book. "KFC showed how a chicken franchise restaurant operates and how salting methods are important for taste."

Mexicana, Pelicana, and Cheogagip were among the first generation brands launched in the 1980s, and many of them sprung up in Daegu and the surrounding Gyeongsang Province where many poultry farms were located. Local franchises tweaked recipes with sweet and spicy sauces and offered pickled radish on the side to subdue the greasy taste, providing fast home delivery for free.

The chicken market even expanded in the wake of the 1997-98 Asian financial crisis when many Korean companies carried out massive layoffs. For those who lost their jobs, opening a small chicken place was one of the easiest businesses because several franchises aggressively marketed to expand the number of shops.

The watershed moment came during the 2002 World Cup, in which the South Korean squad advanced to the semi-final for the first time.

During the games co-hosted by South Korea and Japan, people cheered at local pubs, public squares and home, eating chicken and beer, giving birth to the word "chimaek."

As a result, the number of chicken restaurants jumped from 10,000 in 2002 to about 36,000 in 2015, with street vendors and convenience stores also selling fried or baked chicken.

The chicken business, excluding retail sales of chicken, is now valued at some 3 trillion won (US$2.7 billion). When combined with beer sales and expenses for commercials featuring top-notch idol groups and celebrities on major networks, it goes well beyond that figure, according to industry watchers. 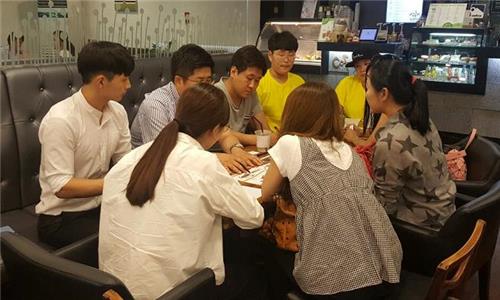 Local franchises explain how to open an overseas branch at a trade fair held on the sidelines of "Daegu Chimac Festival" on July 28, 2016. (Yonhap)

Entering an age of limited competition, the Korea Chimac Industry Association, the host of Daegu Chimac Festival, says it hopes the summer festival could promote local franchises' brand image beyond the domestic market.

"Chicken and beer is one of the most popular and familiar food experiences in Korea, and we want to make it a killer attraction to target the global market," Choi Sung-nam, the association's director-general, said.

This year, a trade fair was held on the sidelines of the event to help local brands make inroads into the global market. A dozen buyers from seven countries, including China, Vietnam and Malaysia, had consultation sessions in search of new business opportunities.

In China, a 2014 Korean drama, "My Love from the Star," created a buzz among youngsters as they frequented Korean restaurants to eat like its heroine, played by Korean top celebrity Jun Ji-hyun. Earlier this year, a group of some 4,500 Chinese tourists came to South Korea and enjoyed an outdoor chicken-and-beer party in Incheon, west of Seoul. 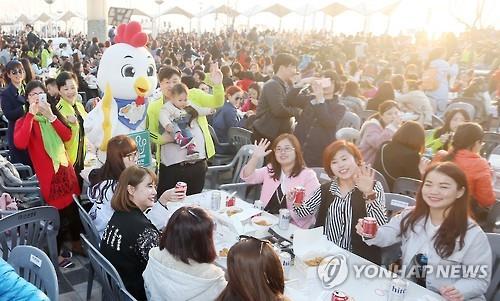 About 4,500 Chinese tourists enjoy chicken and beer in Incheon, west of Seoul, on March 28, 2016, organized by the provincial government. (Yonhap)

"The number of Korean restaurants has fast increased over the past years thanks to dramas and K-pop people," Chu said. "You just have to really open up more to find interests among young people and make them try chicken and beer as a trendy culture."

The key of having a sustainable business, other experts say, lies in whether the Korean franchises can adjust the concept in accordance with the life style of local consumers.

"Chinese do not think of chicken restaurants as a place to drink alcohol and they come to Korean restaurants just to have food. The concept is different, but the taste itself is fine," said Paul Mak, a managing director of Mak Brands, which has opened Korean franchise restaurants in Shanghai.

"Other than the people who watch Korean dramas, can you get the normal Chinese guys, the ladies who go shop in the food market and older guys? That is the question you need to ask when thinking of a long-term business plan."