(DAEGU=Yonhap News) The number of foreign medical tourists visiting Daegu is expected to exceed 20,000 for the first time this year. 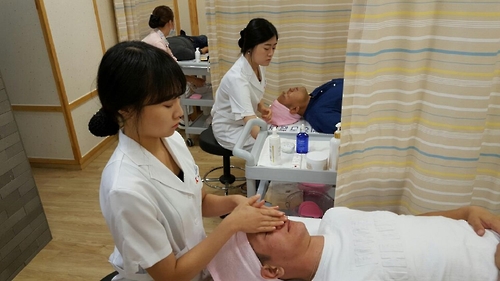 Daegu City announced that a total of 19,000 international medical tourists have visited the city as of the end of November, up 6,000 from 12,988 in the same period last year.

With the continued inflow of tourists this month, the visitor numbers are well on the way to surpass 20,000 mark by year-end.

Such rise in number of visitors is a result of active marketing campaigns conducted in China, Russia, Kazakhstan, Vietnam, and Philippines, the city explained.

The number of medical tourists from Russia and Kazakhstan, many of whom are with severe diseases, was only 383 last year, but increased almost five-fold this year to 1,855 as of the end of October.

The Daegu Oriental Hospital of Daegu Haany University, which established the International Medical Center in June, is also seeing rise in visitor numbers from 349 last year to 900 this year.

"We expect 60% more medical tourists this year thanks to various initiative to draw more visitors," a city official said.