(GWANGJU=Yonhap News) The cities of Gwangju and Daegu held the inauguration ceremony for the Moonlight Inland Railroad Construction Project Promotion Council at Gwangju City Hall on July 20, and agreed to work together to that end.

The event was attended by Gwangju mayor Yoon Jang-hyun, Daegu mayor Kwon Young-jin and Deputy Speaker of the National Assembly Park Ju-seon, as well as national assembly members based in either city and members of either local assembly.

The council is compose of 46 members, including leaders from private and public sectors, presidents of local universities, and ordinary citizens.

In a joint declaration, the council stated "the lack of transportation infrastructure connecting the two cities has discouraged the exchange of goods and human resources," adding, "when the new railroad opens, it will provide a quick and safe connection between the Honam and Yeongnam regions, contributing to the greater goal of balanced national development."

When completed, the Moonlight Inland Railroad will span 191 kilometers, and enable passengers to travel between the two cities in less than an hour. 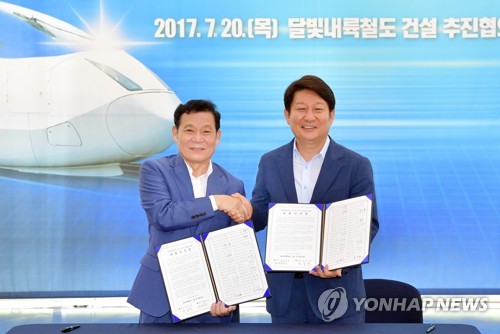