(SEOUL=Yonhap News) T'way Air Co., one of South Korea's six budget carriers, said Tuesday it will add a new route to Bangkok in October to strengthen services on non-Chinese routes.

With the 189-seat B737-800 jet, T'way Air will begin services on the Daegu-Bangkok route beginning Oct. 29, the low-cost carrier said in a statement.

T'way Air has an international route to Bangkok, but it leaves from the Incheon airport. It operates 19 B737-800 jets all chartered from Boeing.

South Korean passenger carriers have struggled with lower travel demand from China amid ongoing political tensions between the two countries over the deployment of an advanced U.S. anti-missile system in South Korea to deter North Korean provocations.

In March, Beijing banned the sale of group travel packages to South Korea in retaliation against the deployment, which it argues is aimed at spying on its military. 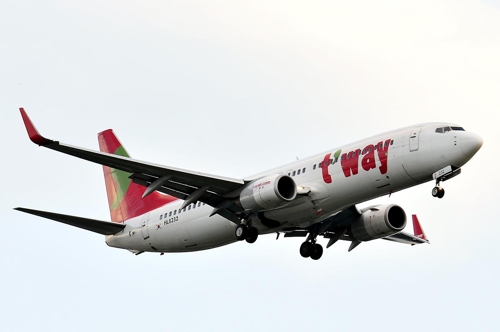