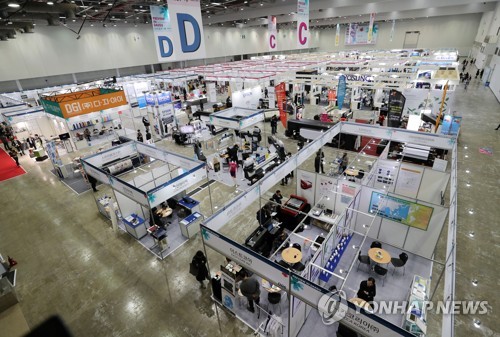 (DAEGU=Yonhap News) On March 10, the Organizing Committee for Preview in Daegu 2018 announced that this year’s event reported outcomes exceeding the last year’s event both in terms of businesses consulted and deals concluded.

Preview in Daegu, which celebrated its 17th anniversary this year, began its three-day journey on March 7 at Daegu EXCO and other venues.

The event attracted 2.5% more visitors compared to last year, with a total of 24,820 visitors.

Moreover, the 300 fashion businesses participating in the event discussed deals worth KRW 232 million in total, recording a 2.1% increase YoY.

Of those, the total worth of the concluded deals was KRW 93.9 million, which is a 1.8% increase from last year.

Participants showcased a wide range of advanced materials with improved aesthetics and functionalities. Among the things that attracted the visitors’ attention were 3D printers, ICT items, and other new industrial products with cutting-edge features created through the convergent efforts spanning across multiple disciplines and areas.

In particular, Preview in Daegu attracted buyers from 22 countries, including China, the United States, France, India, and Turkey, which signaled a bright future for the export of local textile products. The event coincided with the Global Textile Vision Forum (TEXPO), Textile + Fashion Collaboration, Daegu Fashion Fair Buying Show, and other textile-related activities.

“I hope the event will create the foothold for diversifying the target markets of our textile products and boosting our global competitiveness,” Chairperson Lee Yeui-Yeol of Preview in Daegu Organizing Committee said.