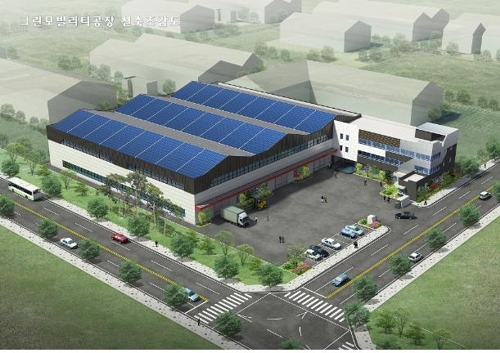 (DAEGU=Yonhap News) Green Mobility, a manufacturer of electric two-wheeled vehicles, will start the construction of its new factory in the Daegu National Industrial Cluster on March 21 with a groundbreaking ceremony.

According to the Daegu Metropolitan Government, Green Mobility intends to establish a new major factory, amounting to 5,600 m2 in total area, sprawling over a site of 7,000 m2, and capable of producing 500 two-wheeled vehicles and 200 three-wheeled vehicles simultaneously each month. The construction is to reach its completion late in May.

The company has already manufactured 1,100 electric two-wheeled vehicles since it began leasing a factory in the Dalseong Industrial Cluster II in 2016.

The company’s business has been strong and growing as its clientele of 107 distributors now include the M Lounge of E-Mart and KR Motors. The company has also begun to supply its vehicles for Korea Post and newspaper companies for the delivery of mails and newspapers.

This year, Green Mobility plans to increase its output from 2,350 to 3,300 vehicles and generate KRW 16 billion in sales.

The company is currently awaiting the results of the Ministry of Environment’s test on two of its two-wheeled vehicles and three of its three-wheeled vehicles, which the company submitted to the ministry for subsidies.

With the goal of distributing 1,200 new electric two-wheeled vehicles throughout the city this year, the Daegu Metropolitan Government began to receive applications on February 26 and has received applications for the purchase of 450 vehicles in total.

Choi Un-baek, the head of the Future Industry Steering Division at the Daegu Metropolitan Government, commented, “Increasing the capacity of Green Mobility will boost our effort to distribute more electric two-wheeled vehicles, and energize related industries, thus leading to the creation of more jobs.”