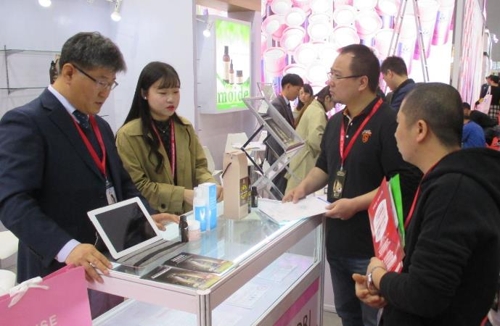 (DAEGU=Yonhap News) The cosmetics companies of Daegu were received warmly at a recent cosmetics industry fair held in China and are now expecting to see a significant improvement in their business in the said country. This comes after the freezing of trade relations between Korean and China for almost a year since its deployment of the Terminal High Altitude Area Defense (THAAD) system.

According to the Daegu Techno Park on March 21, the local cosmetics businesses that attended the Spring International Beauty Fair in Guangzhou for three days starting on March 10th returned home with possible exports of USD 5.28 million after having held 118 meetings with Chinese buyers, and signed actual contracts worth USD 0.26 million.

Compared to last year’s fair, where Korean businesses saw almost no business activity due to the THAAD conflict, Daegu’s cosmetic businesses this year saw the number of their meetings grow by 146 percent and the financial value of their contracts also grow by 73 percent.

The Korean Traditional Medicine Industry Support Center at the Daegu Techno Park provided support for 10 local businesses, including Herb Noori and U-BioMed, under its Program on Facilitating the K-Beauty Export Consortium in Daegu.

Thanks to such support, Herb Noori, which produces cosmetic products with all-natural ingredients, signed a new contract with East Joy International on exporting USD 0.1 million-worth of its shampoos to China, and has also begun discussions on developing new skin essences and creams for Chinese consumers.

U-BioMed, a Pre-Star Enterprise supported by the Daegu Metropolitan Government, signed contracts worth USD 0.13 million in total with two local companies, that will distribute its pain-free beauty injection needles and skin and scalp care products.

The Daegu Techno Park explained that the majority of participating Daegu businesses succeeded in signing contracts with local companies and strengthening their ties with local buyers.

Park Jin-seok, head of the Korean Traditional Medicine Industry Support Center, explained: “Daegu’s businesses are excited to resume their business with companies in China, by far the largest offshore market for the Korean beauty and cosmetic industry.”