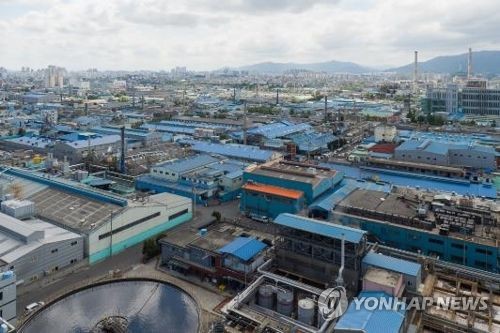 (DAEGU=Yonhap News) The regeneration plans for Daegu's textile dyeing industrial complex are complete and ready for the next steps.

On June 29, the city of Daegu announced it will designate the textile dyeing industrial complex as a regenerative business district on July 2.

The complex was built in 1980 and has served as the source of competitiveness for Daegu's textile industry. However, the 40-year-old infrastructure is worn out and poses work safety concerns.

In 2015, the textile dyeing industrial complex was included in the country's projects to regenerate aging industrial complexes. Last February, the city underwent validity tests with the Ministry of Land, Infrastructure and Transport and finalized negotiations for the total expenses for the project.

From next April to May, the city plans to complete all the admistrative tasks by holding an industrial location council with the city planning committee.

The city will run the plans and come up with specific procedures by the second half of this year. From 2019 to 2025, the city will begin construction starting from the parking lot, roads and then the basic facilities.