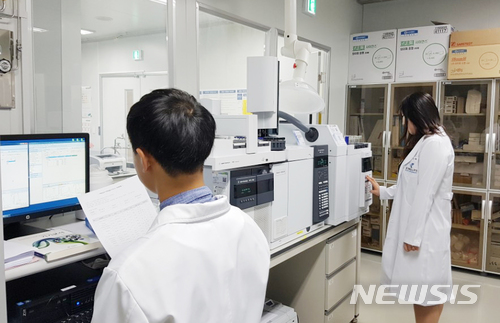 Cosmetics produced in Daegu and Gyeongbuk Province are riding the Korean Wave and have become the promising export products.

According to the Daegu Main Customs on August 21, the total export volume of cosmetics produced in the region this year increased year-on-year by 28% to USD 26.329 million.

The total import volume in the same period this year was USD 117,000, resulting in the trade surplus of USD 26.212 million.

The total export volume of cosmetics in Daegu was USD 17.475 million, increased by 35% compared to last year.

In Gyeongbuk area, the volume of export recorded USD 8.854 million and that of import was USD 43,000, both increased by 15% and 139% respectively compared to last year.

Meanwhile, Daegu will spend a total of KRW 13.7 billion to foster cosmetics and beauty industry as a leading industry of innovative growth, jointly with the Oriental Medicine Industry Support Center.

Gyeongbuk Province is establishing a Global K-beauty Integrated Platform in Gyeongsan with the aim of taking a leap forward as the Asia Cosmetics Hub by 2022.

"Advanced technology and high quality will continuously bring increase in the export of the cosmetics," said an official from the Daegu Main Customs.