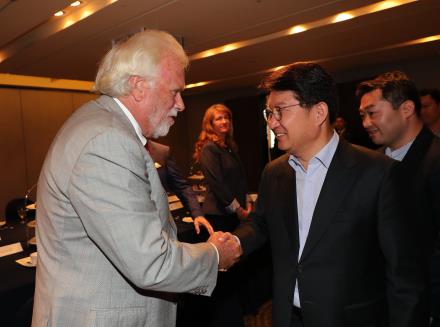 (DAEGU=Yonhap News) Daegu Mayor Kwon Young-jin had a meeting with the CEO of Rich Products Corporation in Daegu to discuss cooperation and investments in the healthcare sector.

According to the city on October 22, Kwon sat with Robert Rich, CEO of Rich Products Corporation, to discuss additional investments and cooperation in the sector, including the establishmentt of a new research center at the Rich Products Korea plant in Daegu, which was built in 2011.

Rich Products Corporation is a global food company that has producing plants in 26 cities of the world in 112 countries .

The Daegu plant, which is the corporation’s only manufacturing facility in Korea, mainly manufactures vegetable-based cream used as whipped cream for coffee. The plant recorded KRW 39.5 billion in revenue last year.

A Daegu city official said, “The mayor met with the executive level of Rich Products Corporation for a comprehensive discussion on possible cooperation with Daegu in the health care sector and job creation.” The official also said, “I hope that the meeting will bring about positive results, which will boost the city’s current growth trajectory.”