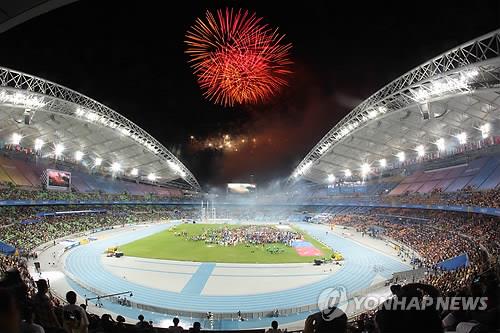 (DAEGU=Yonhap News) Daegu City has been selected as the event venue for the 2021 International Children's Games (ICG).

At the conference in Lake Placid, the United States, the ICG Commitee gave a unanimous vote for Daegu to hold the next ICG in 2021.

The committee made the final decision after conducting site surveys in Daegu and 5 cities of Israel, China, Taiwan and Mexico.

Every year at Summer ICG, youth in the age of 12~15 build friendship and bond transcending politics, religion and race.

The first ICG was held in Slovenia, 1968, with the goal of succeeding the Olympics spirit and contributing to world peace.

At the coming ICG in Daegu, about 2,000 athletes and staff members from 90 cities around the world will participate in 8 sports including track and field, swimming and Taekwondo.

The city also plans to invite youth from North Korea to the ICG, considering the reconciliation atmosphere between the two Koreas.

A city official said, "We hope the international sports event will add a lively atmosphere to Daegu and Gyeongbuk region and reinvigorate local tourism."