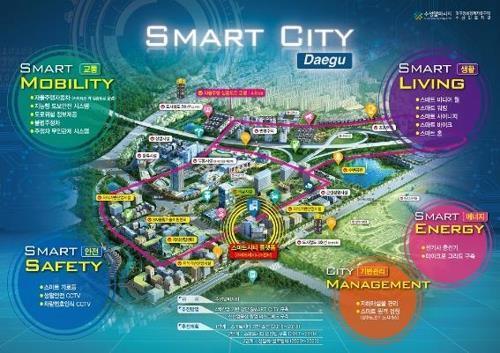 (DAEGU=Yonhap News)2019 Daegu Smart City International Symposium is to be held at Daegu Expo on January 23 .

According to Daegu city, the symposium will discuss global trend of smart city, presented by experts from home and abroad, under the title of "Smart City in My Phone", and the city's future plan for smart city.

In the first part, Chairman of Korea Creative Economy Research Network(KCER) will give a keynote speech, followed by presentation of case studies on smart city of Singapore, and Spain, and experts discussion.

The second part will be composed of "Smart City Tech Conference" where 20 companies present trends of the latest technologies, and "Smart urban generation conference" that discusses various urban regeneration cases and ideas.

To help ordinary citizens' understanding, there will be a video showing how latest technologies concerning smart city will transform Daegu and daily life.

The city will take application to attend the conference online via http://www.smartdaegu123.kr by January 20, hoping to imagine the future of smart city together, gathering various ideas.

The city launched a Daegu Smart City Support Center, having been selected in MOLIT's ntaional strategic project, and plan to complete the establishment of Suseong Alpha City, the first step in smart service, in cooperation with Daegu Urban Corporation.

The Symposium is hosted by Daegu city, and co-organized by Daegu Urban Corporation, KCER, and Smart City Association.