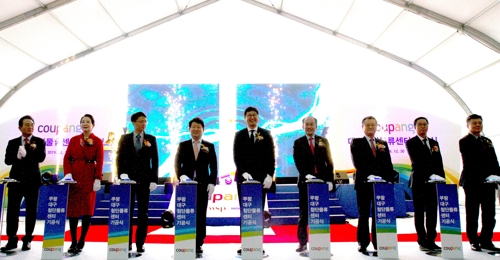 Coupang, the largest e-commerce business in S. Korea, unveiled its plan to newly establish a mega-size, probably the largest, distribution center they’ve got, whose size is equivalent to about 46 full-size soccer stadium.

The online retailer announced the plan on Dec. 30, 2019, saying they held a ground breaking ceremony, attended by a dozen senior level city officials and the head of the company in the national industrial cluster, located inside the city of Daegu.

The entire phase of the construction project is set to compete by the year 2021. And it costs KRW 320 billion in total.

This super large center appears to serve as a nationwide logistical hub, connecting both the southeastern and southwestern region in Korea like spiders’ web. Once the construction is over, their key signature, so called ‘Rocket Delivery’, which refers to a super-fast, overnight shipping service, would become even faster than it is now.

Coupang says “We’re now running a recruitment plan to hire local residents living in Daegu, the best possible candidates to work with us in the giant warehouse. I believe, the project could create as many as 2,500 jobs.”

“Daegu city will pay close attention to ways to team up with businesses, especially in the fields that can further advance logistics such as artificial intelligence, robotic engineering and unmanned transportation service.”, said city mayor Kwon Young-jin, who joined the grand opening of the ceremony.