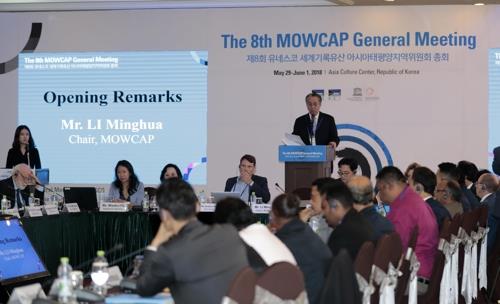 (GWANGJU=Yonhap News) Two items of Korea's ancient documentary heritage have successfully made it onto the register of the Memory of the World Committee for Asia and the Pacific (MOWCAP), the regional forum for UNESCO's global Memory of the World Programme (MOW).

The decision was made Thursday at the 8th MOWCAP General Meeting, currently running from Tuesday until Friday at the Asia Culture Center (ACC) in the southwestern city of Gwangju.

The two items are "Maninso: Ten Thousand People's Petitions" and "Name Boards and Verse Plaques on Royal Architecture of the Joseon Dynasty."

The former is a petition filed by Confucian intellectuals of the Joseon Dynasty (1392-1910) to a king in an early form of democracy. A petition was submitted seven times when Confucian scholars believed there were a need to voice their concern on a royal decision. The latter was acknowledged for its historical and artistic importance as it contains priceless information on palatial architecture.

The general meeting is attended by 150 documentary heritage exports from 31 nations.

MOWCAP, established in 1998, is the regional forum for UNESCO's global MOW project and aims to assist "with preservation of and universal access to documentary heritage of the Asia/Pacific region, and also to increase awareness of the existence and significance of the heritage," according to its website.