(ULSAN=Yonhap News) A team of Ulsan officials led by the city Mayor Kim Gi-hyeon will be on a tour to the US, Germany and Kuwait during October 24~31, 2016 in a bid to boost investment in the city. 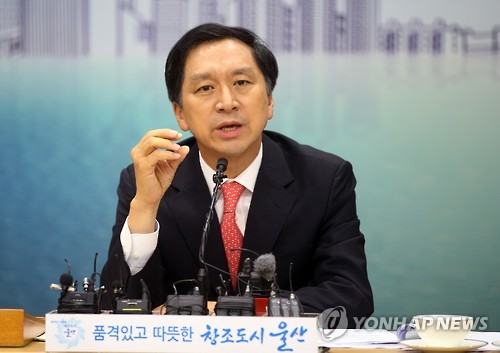 In the U.S. leg of the tour, the team is scheduled to hold a meeting with representatives from New York trade office responsible for foreign investment promotion in North America to share ideas on possible cooperation. After the meeting, the team will move to Pennsylvania to sign a memorandum of understanding (MOU) for additional investment with global industrial gas supplier Air Products. Following the signing of the MOU, the world's fourth largest industrial gas supplier will invest KRW 85 billion in Ulsan by 2018 to expand its production facility for nitrogen, oxygen and argon.

In Germany, Ulsan officials will meet management of German-based chemicals giants Basf and Wacker to encourage investment in the city.

Ulsan Metropolitan City will attend the signing of a Letter of Intent (LOI) for investment between Kuwait's Petrochemical Industries Company (PIC) and Korea's SK Advanced. Earlier in January, the city entered into a MOU for strategic investment partnership with the national petrochemical company and attracted investment of USD 97 million.