Hyundai said the first vehicles were produced on Monday at its assembly plant in Ulsan, 414 kilometers southeast of Seoul, with up to 47 units to be built every hour. The domestic sales target has been set at 26,000 vehicles with exports forecast to reach 41,000 units for this year.

Hyundai said consumer demand for the car is strong, pointing out that it received 2,000 preorders on the first day of accepting requests to buy the Kona.

Industry watchers said the Kona could serve as a game changer for the subcompact SUV market in the country where more than 100,000 small SUVs were sold last year.

"We are determined to manufacture the best quality products to satisfy the needs of customers as the Kona has been receiving much attention and good reviews following the world premiere event," a Hyundai official said.

The Kona SUV, priced at between 19 million won (US$16,800) and 27 million won for domestic consumers, either has a 1.6-liter gasoline turbo engine or a 1.6-liter diesel engine and is fitted with a seven-speed dual clutch transmission.

Hyundai said it will start the production of the Kona for export to Europe and the United States in August and December, respectively.

Hyundai has said it will also unveil four more SUVs by 2020 to add new models to its current lineup of the Creta, Tucson, Santa Fe and Maxcruz.

The five new SUVs are the all-electric Kona, a fuel cell-based car, an SUV larger than the Santa Fe, and two smaller-sized crossovers, the flagship company of Hyundai Motor Group said. 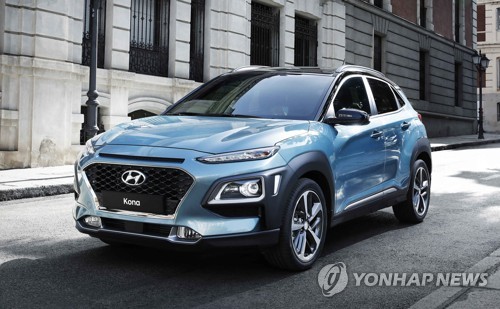