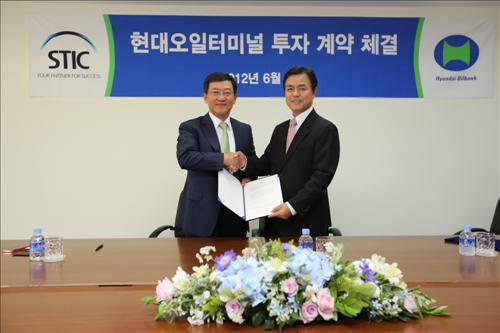 Hyundai Oilbank inked an agreement with STIC Investment to entice 33 billion won-investment in its oil storage business to be built in Ulsan New Port through a private equity fund operated by the investment company.

Hyundai Oil Terminal, tasked with oil storage business and separated from Hyundai Oilbank in February, aims at building a 29 ton-oil storage tank at Ulsan New Port by next year. The company is 100 percent owned by Hyundai Oilbank.

Under the agreement, Hyundai Oilbank will be responsible for 36 percent of the construction expenses worth $90 billion won. The joint investment holds significance in that Korean citizens subscribing to pension fund also became to participate in the investment since the major domestic pension fund is one of the major investors of the private equity fund operated by STIC Investment.

Hyundai Oilbank plans to get Hyundai Oil Terminal listed on the KOSDAQ in 2015. Based on the listed stocks, Hyundai Oilbank will evolve the company into East Asia's largest logistics company by expanding their industrial oil storage operation abroad.

"The recent investment attraction from the private equity fund will accelerate our efforts to diversify our business portfolio and to make Ulsan News Port an oil storage hub," said an executive of Hyundai Oilbank.

STIC Investment, founded in 1999, is a professional investment company with offices all around the world including China, Taiwan, Vietnam, Hong Korea and America and with the largest accumulated capital in Korea worth about 2.3 trillion won.

** This is the translation of a Korean article.